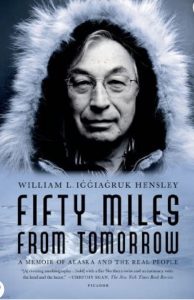 Born thirty miles north of the Arctic Circle, William was raised in the semi-nomadic lifestyle of the Inupiaq people. This memoir takes the reader through William’s childhood on shore of the Chukchi Sea through his fight in Washington for Native land rights. After years of lobbying the government, he played a key role in a landmark victory that enabled the Inupiaq to take charge of their economic and political destiny.

“With his memoir of Alaska, the Iñupiat elder William L. Iggiagruk Hensley offers a coming-of-age story for a state and a people, both still young and in the making. And while there are familiar notes in the Dickensian telling of this tale, Hensley manages to make fresh an old narrative of people who arise just as their culture is being erased . . . His book is also bright and detailed, moving along at a clip most sled dogs would have trouble keeping up with. . . . On a personal level, the book is riveting autobiography. Anyone who thinks times are hard now need only consider a winter spent on an ice floor under a sod roof, and the prospect of a life-or-death journey to the outhouse. . . . But the rush to modern life took a big psychic toll. Alcohol, suicide, domestic violence—the familiar litany of native social ills—prompted a long journey of the soul for Hensley. As with every other episode of his life, it is told here with a Far Northern twist and an intimacy with the land and the heart.” — Timothy Egan, The New York Times Book Review

Available at many online stores

Read another riveting book about survival in the Far North: 81 Days Below Zero by Brian Murphy. Here’s my review.