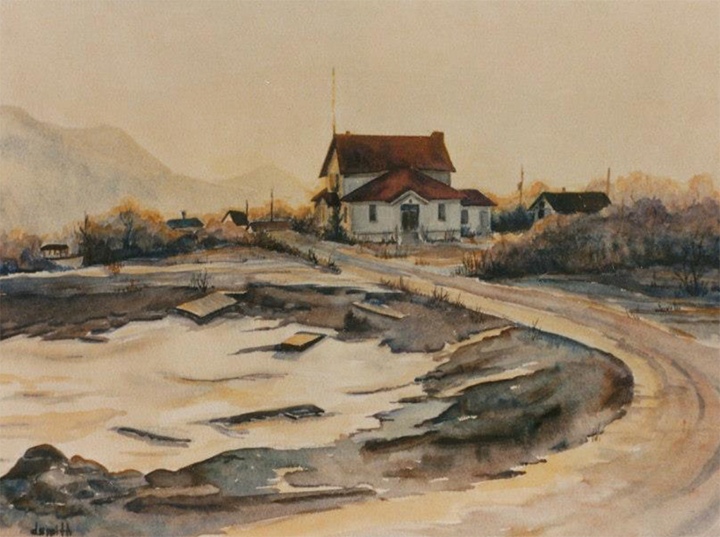 On McBride Boulevard looking toward the Geological Institute.

This building was originally a wing of Saint Andrews Hospital opened in 1942 to serve Atlinite’s and neighboring communities. It was built from salvaged lumber and even nails from the demolition of the south wing of the Atlin Inn. Saint Andrews was closed only a few months later due to lack of patients. The conflict in Europe was draining the young miners and the area was facing a recession. In 1954, the Hospital would reopen briefly but again a lack of patients forced its closure. One wing was moved and salvaged and is the subject of this painting. The other wing was destroyed. The nurse’s residence, once attached to Saint Andrews, was also moved and restored. It became an art gallery and later a home.

What is now the Glaciological Building sat vacant until in 1964 when the Foundation of Glacier and Environmental Research under the direction of Dr. Maynard Miller bought the building. It became their research center and forever after has been referred to as the Glacier institute. Here is another example where a private citizen or a group has protected and preserved an important part of Atlin’s History. One of Dr. Maynard’s sons also restored and retained another of Atlin jewels. Literally, it was a jewelry store.

Aside from the interiors of the previously named Kirkwood Cottages and a single staircase at the recreation hall, the only thing to remain from Atlin’s grandest hotel is the entire Glaciological building/former hospital, right down to the nails.

A quick bit of info. The Foundation of Glaciological and Environmental Research, also referred to as the Juneau Icefield Research Program, has conducted studies on the Juneau Icefield since 1946. Atlin’s Llewellyn Glacier is part of the ice field. Dr Maynard annually led a research group that traversed the ice field from Juneau to Atlin for many decades.

You can read about other Atlin buildings and childhood adventures in them in Brad’s Memoir.