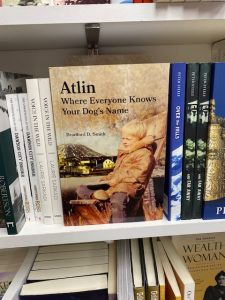 Atlin Where Everyone Knows Your Dog’s Name on Mac’s shelf.

Visiting Whitehorse? Be sure to stop by Mac’s

For a small town Atlin boy in the late nineteen-sixties, a trip to the big city of Whitehorse was a magical time. Without T.V. or radio, magazines and books were our information and entertainment. A stop at Mac’s News Stand (now Mac’s Fireweed Books) on Main Street was a necessity as well as an enjoyment.

My earliest memories are of the thousands of new, crisp books, magazines and comic books. I was mesmerized and could not comprehend how I was going to read them all.  The smell of new paper permeated the store. It was always busy in Mac’s but no one minded if you stripped off the layers of winter wear and hunkered down with a stack of comics.

In the middle of January every time the door opened, a billowing cloud of steam preceded the next customer. In the summer, the door was left open and an odd stray dog might wander in.

I was allowed to get at least one book every time we stopped at Mac’s. When I was very young, I collected the Noddy series by English author Enid Blyton. I was always excited to get a new one. As I got older, I moved up to Rupert the Bear Books by another English author, Mary Tourtel. I loved series and the anticipation of the next book was the best part.

My mom considered comic books a waste of time so I wasn’t allowed to get any and I had to be sneaky if I wanted to look at them. When I got a bit older, I was constantly moving around the store flipping through a comic and hiding from Mom. For some strange reason she didn’t mind Asterix, the comic about a Gaulish warrior and his ridiculous sidekicks by French author Albert Uderzo.

It was obviously a comic book, but for some reason it didn’t trigger her ire. I think she appreciated the artwork and perhaps the longevity appealed to her. Comics were impermanent in her mind. Comic books like Asterix and Rin Tin Tin were only available to us at Mac’s News Stand. The Sears Catalog didn’t have them and no other store within thousands of miles carried them. This was the case with hundreds of periodicals and book series that Mac’s faithfully stocked for their voracious customers.

For the brief time we lived in Inuvik, Mac’s News was a weekly family outing where I bought Karate and hockey magazines and hockey cards. My parents bought newspapers from around the world and we all bought books.

Mac’s was an integral part of my reading upbringing and helped me form a vast appreciation of literature. Because of the wonder, awe, anticipation, and ultimately satisfaction Mac’s provided me in my formative years, books have always been important to me. I like to believe those early trips to Mac’s ultimately led to me writing my own book, and I am more than honored to have it for sale at Mac’s Fireweed Books.

Talk about coming full circle. From those fuzzy first memories of a three-year-old and those Noddy books to over fifty years later seeing my own book grace those same shelves is humbling.

Atlin Where Everyone Knows Your Dog’s Name is available at many online stores.