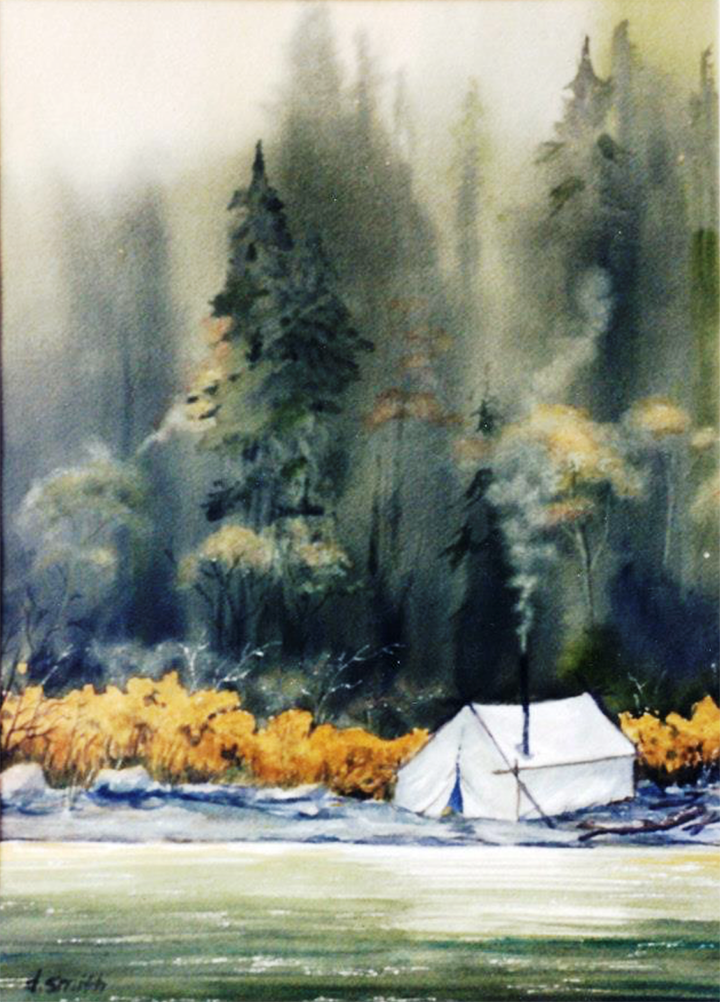 A wall tent summer camp at the base of Theresa Island.

Teresa Island is the second tallest lake island in the world, standing at 6,153 (1875m) feet above sea level. Twelve Mile Bay was the site of our trap line cabin.

I took a boat trip to Twelve-Mile Bay one summer with a group of peers as part of a Cub Scout outing. We set up our camp near the beach on a flat, sandy area surrounded by old, gnarled pine trees. After lunch we climbed a nearby hill.  Overall we were approximately three miles (5km) from camp. Once we reached the top, we pulled out the binoculars and observed a sow black bear and two cubs having a great old time ransacking our campsite. One of the adults shot a few times in the air, but the bears didn’t seem to notice. He then tried to hit something closer to the bears hoping the noise might scare them, but that didn’t work either. Finally in desperation, he sprinted back down the hill and off toward our camp. Not a particularly prudent strategy but, in the heat of the moment, you never know what you might do to save your marshmallows and hotdogs. Possibly rash but never the less effective, as he was successful in running the marauding mama and cubs away. It was a dinner challenge trying to make a meal out of a variety of half-eaten food items.

Read about the Atlin Horse Barn and Hay Loft painting.

You can read about more wilderness adventures in Brad’s Memoir.