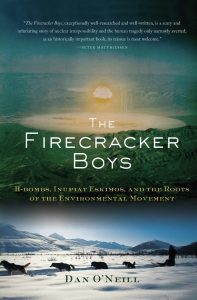 In 1958, Edward Teller the father of the H bomb wanted to explode six megaton atomic bombs on the coast of northwest Alaska, only a few miles from the Inupiat settlement of Point Hope.

This story will tell you why the United States government deemed it necessary and how a grass roots movement led by a community of Inupiat’s, a few skeptical scientist and a handful of conservationists stopped the project. It was the birth of the environmental movement and an era when the US government was used to getting its way.

This is a classic David and Goliath story, written wonderfully by Dan O’Neill. Firecracker Boys is informative but a quick and entertaining read. I really enjoyed this book and it filled in a large gap in my Alaska History knowledge.